Living the high life on the water 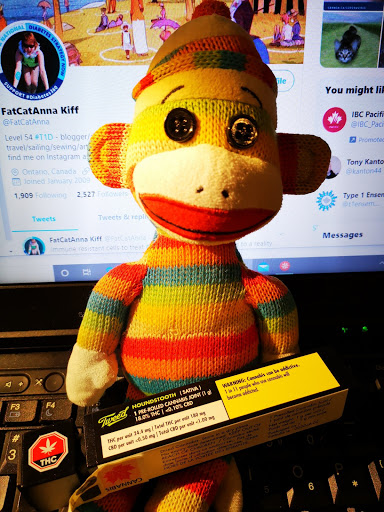 Okay, first, I am not Bill Gates, where I never inhaled and neither does Sock Monkey (really, he doesn't).  I thought this would be a great opener for what I'm finding a VERY difficult blog to write.  I've been dwelling on how to put my experience that many of you saw and commented on my Instagram post, but I personally, do not remember too much, but my DH does.

Since the '70s, as a Type 1 Diabetic, I took up the occasional puff puff when going out with friends.  It was mainly due to the fact that drinking alcohol was not one of my top things to relax with when out.  Being an introvert, it helped me loosen up a bit and at least remember the next day what I did.  Also, I tended to be the designated driver for my friends, since most of them couldn't afford the luxury of a car.

Fast forward 40 years later, cannabis (weed) in Canada has been legal for both recreational and medicinal purposes since 2018.  Along with that, this year where I live, our small town that I believe still holds the record for the most Tim Horton's in Canada.  It looks like we are going the same route with shops opening up (and the one we went to called Shiny Bud... right across from, yuppers a Tim Horton ).  Think of these weed shops as being like a "candy store", which is how I felt when I stepped into one about a month ago to check out what it's all about.  Lots of goodies behind locked up display cases, etc.

My DH uses medicinal weed to help him deal with life.  Since he's started, I have seen an increase with my puff puff range during the week, unlike when he was working, it was just a weekend treat.  My main dislike is getting the munchies afterward, which we all know, will increase blood sugar control along with weight excess as a diabetic.  Of course, we all differ in how our bodies react, just like our insulin use.

Last weekend, my DH went to the shop to pick up some goodies, and the package you see above nestled in Sock Monkey's legs is a pre-rolled joint from Tweed.  It's a fat little bugger, and just a few puffs, sent me into a horrible spiral.

Here I was sitting on the side of our sailboat at our mooring ball, feet dangling over, relaxing after a day of work (I do a weekend shift) as we waited for dinner to cook on the BBQ.  I try to only smoke when I know that food will be involved since it works out better for the munchies along with insulin coverage. Basically from what I can remember over the period of an hour was my husband trying to hold onto me as I puked, sweated like I was in a sauna (I remember that bit), and slipping in/out of laa-laa-land so I wouldn't slip through the lifelines and fall into the water.  I swear I was hallucinating, and talking out loud (I thought I was shouting), but he said I wasn't quite making sense, even though it felt so real. 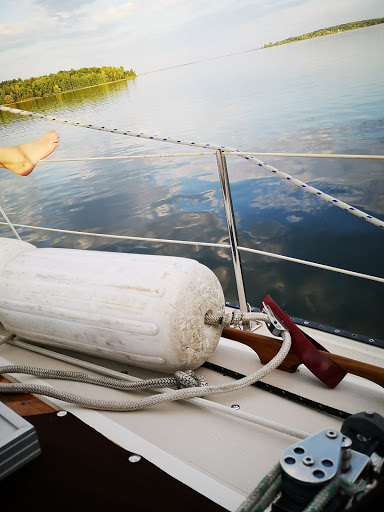 What was alarming him was my Fitbit showing my heart racing away, and I think I remember telling him to check on it, along with my Dexcom to see if I was having a low blood sugar (see - we diabetics can't shut our brains down when we're in a bad place).  Blood sugars were perfect!

What follows after that was him trying to get the attention of a few other moored boats for help, and when they did hear him, one of the members of our club who had experienced a stroke on his boat (where he voice-activated his mobile since he could not move, to get help).  I vaguely remember being rolled under the lifelines (and I'm no small person), into a dinghy. Being held, talked to keep me from passing out, it seemed like it took forever to get to shore (and the same thing with the ambulance ride).  The whole time I had my eyes closed for some reason. Weird, weird, weird.  Even composing this now, it feels like a dream.

So, this pukey coated old cat got loaded off onto the front dock of our club and whisked away by ambulance to the closest hospital about 20 minutes away.  Once I started to feel my body again, and be able to talk/think properly, it was basically determined that the higher concentration of TSH in this pre-rolled joint is probably the culprit.  The doctor pointed out as well, weed has come a long way since the early days, before it, and growers for the markets we have here in Canada are creating stronger and stronger high THC strains then what many of us smoked back in the day.

So, all is good in my little world.  I've not smoked since then, and the smell of it makes me feel nauseated but that may soon pass, but for now, I think if I do partake in a puff puff session, using homegrown (we're allowed to grow 3 plants per household here in Canada) may be the way to go in future. My DH was so worried he was going to lose me, and in my brain during the whole time, I was trying to not freak out that I was having heart issues that are one of the many complications of diabetes.

Thank you to the members of our yacht club who did such a marvelous job of handling the situation, and because of what happened, we're planning on holding a course to teach people how to handle an offshore rescue like they did for me in the near future. 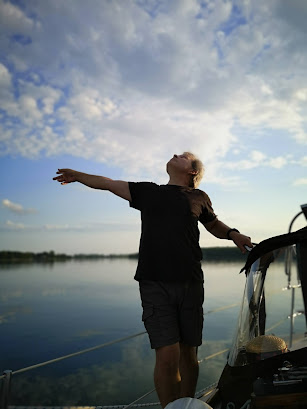