When your eyesight is compromised 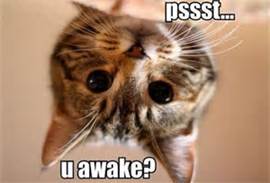 I’ve been abit quiet lately with both blogging and doing my bit in social media since coming back from the IDF conference in Vancouver.  The main reason, I was burnt from doing a lot of diabetes advocacy in the month of November and not being able to see very well since then due to having some sort of allergic reaction in Vancouver that scared the #@*! out of me since it’s always that “is it due to diabetes?”  So, sadly  this is now making it difficult for me to stare at any gadget with a screen, even with looking away every 20 minutes (this was recommended by my optometrist back in November – and is good advice for EVERYONE who works on a screen or any other type of device).  Even better, to remember to take that 20-20-20 break … you can download a free app to remind you to take eye  breaks called Workrave (sadly not available to Mac).

If any of you follow me on Instagram / Facebook / Twitter you would have seen some of my posts on how the skin around my eyes looked (they freaked out my Mum and Dad to no end).  Whether it was the new BLUE carpeting that was put down in the conference centre for the event that let off various chemicals (this is what one of the RN’s that was a volunteer like me had thought it could be) … the drier air … higher altitude in BC … who knows.  It got to the point where the skin around my eyes was so swollen that I thought I’d need a guide dog to allow me to see.  I was a very scared cat! 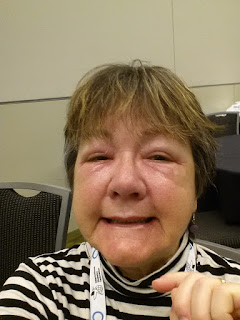 My only relief was the daily 2 km walk to the conference and back with the moist Vancouver air hitting my eyes, but things were going from bad to worse on a daily basis (I had the same thing happen in Las Vegas in March at another diabetic conference – so is it a combination of drier climate and being in a conference area that has carpeting ?).  I had one pharmacist telling me to use a cortisone cream around my eyes (carefully – as he advised – it’s not supposed to be placed near eyes) – which did not work at all but actually made it worse.    In the end, a few of the CDE’s that were part of the same volunteer team that I was with, suggested taking an antihistamine, and the pharmacy they directed me to managed to find the right type to use for what I was going through (non drowsy of course so I wouldn’t drift off to la-la-land during the 8-12 hour days that most of us were having at the conference).

Sadly, it’s never quite cleared up completely, so who knows what is causing it (dry air of winter? or natural gas heating which is a new thing to me being from a house that was heated by oil or electricity before?).  I’m just dealing with it as best as I can after going to a local walk in clinic where all they could say was it would get better .  I demanded at that point for a referral to an Allergist which sadly the GP said it may still not help (I see the Allergist at the end of March).  After that, who knows, maybe a dermatologist (there are only 2 in the town I live in) will be the next step to figure out what is causing the skin problems surrounding my eyes (I do have rosacea which can cause problems with your eyes … but as someone suggested it also could be eczema).

All I know, in composing this blog, even with typing with my eyes closed, my eyes are screaming, both inside and out with a feeling like a dry dessert  (and yes I use moisturizing eye drops a lot since the cornealabrasion episode last fall).  The only good thing though, with December’s annual diabetic eye check-up?  My old fart diabetic eyes are doing extremely well with having diabetes since 1967 with not extreme changes..

Eye drop time ... moisturize the parched skin area (good thing - I have no wrinkles with the skin so stretched ... I look 21 again) - take a break from the screen… until next time my readers! 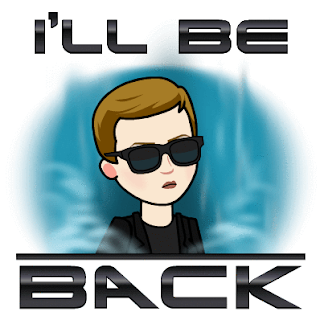