The above is a Tweet I posted - while in a baking cooking frenzy (made tomato sauce that day) - the story of my messy kitchen that occurred below explains the reason for my semi-insane mind (no I was not having a hypo <lol>).

The story behind my Tweet the other day - and actually the same applies to alot of the food I cook - is I am a frugal cook.  I buy produce that is about to be put into the pig slop (okay - not so bad - but it's starting to not look pretty - but is still edible).  The same goes for meat that I occassionally feel I'm able to afford - I purchase it when it's at the use by x date - and usually pay 50% less - a big savings in my little world.

I like to eat well - my waistline proves it - but I do try to eat healthy - and not too much - along with varying the types of food I eat - to me - variety is the spice of life.

Believe it or not - I used to hate to cook.  I actually wasn't allowed in the kitchen at home due to making a mess - so left home - not really knowing how to even boil a simple egg.  Due to limited income - I had to learn how to cook quickly - having diabetes and trying to stay in the zone was another big thing for me - and trying not to die at 40 like many of us T1D's were told as teenagers by our endo's back in the "old days"!

So, if you ever come across a pack of zucchini's like I did last week - at $1.49 - and have the ability to make it into many meals (I made 4 meals out of the pack I purchased) - then pat yourself on your back - because sadly - we're a dying breed - those that cook from scratch - but maybe it'll make a comeback in the younger generation of today - who want to know what's in their food that they eat!

Bon appetite!  Off to make up some pineapple jam now (another good deal - huge fresh pineapple bought at $1.99 - it's yielded enough to make for some little snacks - and a few pots of jam to see us thru' the next 6 weeks ... if it lasts that long on our morning toast). 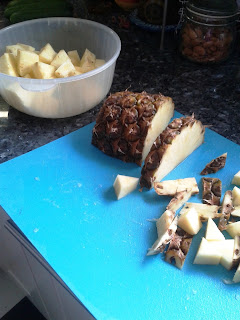 SNAP, Crackle, Pop - Asante is the new kid on the block in the insulin pumping realm

Back in 2011 - I had written in the Diabetes1.org forums about Asante and their new insulin pump called the Pearl.  A German mate of mine - who I was visiting at the time in Spain - said it was being marketed in her country - of course - I went to check it out - and since then - had never thought of it again until recently - when Asante started to relaunch the pump under a new name of SNAP!  Of course, like Michael Hoskins at DiabetesMine - we both thought of a certain cereal ad (do all diabetics think alike???).

The Asante Snap is slowly hoping to become the next kid in town as far as an affordable and easy pump for a diabetic controlling their life with insulin.  Of course, this pump is only available currently to the USA in certain regions of the north east sectors of their country (testing sectors), but they are promising that it will be available all over the USA during this year as well as to more countries over time.
They are currently marketing this pump at being in the price range of $700 USD with a promise that if something happens to the pump that for a minimal fee even when out of the 4-year warranty it will be replaced with latest s/w upgrades.  To me, this is a winner, with the problems I've had with my Animas 2020 since December.  The comparison chart that they show at this link shows the advantages of using their pump.  It basically has all the bells and whistles that I have used in the two pumps I've tried over the 5 years (Animas and Medtronic) but one new thing that FDA recently approved for this pump is the "Drop Detector Alarm" which no other pump manufacturer has.

What I like from the picture and description is Asante has taken into consideration the screen size on the pump itself.  They claim it is supposed to be the largest print of all insulin pumps out on the market which is good for some of us aging diabetics.  Along with that is the size of the pump and its weight.

Now comes the cons - more for the folks that pay out of pocket and use ALOT of insulin per day ...

To read more about the new kid in town (well - not really - it was the Pearl before) - go to this link - feel free to comment either here or at the original blog post - I'll respond either way!
Posted by FatCatAnna at 11:15 AM No comments: