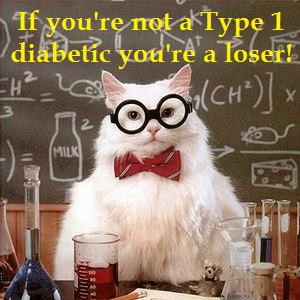 Those words above I think are what really made the 1st Canadian Diabetes Association (CDA) Type 1 Diabetes Expo (#T1DExpo) come to full realisation with 700 participants (and all adults - whoo! whoo!)  involved in this event that was held in Toronto.  Note:   I have since found out that similar events have been going on by The Charles H. Best Diabetes Center in Brooklin, Ontario - and their next one is taking place on May 6th in Ajax, Ontario with similar topic discussions).

I’d say about ½ the participants were all T1D’s and at least 10 of us with +50 years of diagnosis and all in good health!  I’ve never been to a Canadian event that was aimed just at T1D’s .  I didn’t have to travel by air or too long a distance to attend, and be with people who aren’t all insured American with devices that we don’t have here in our country or the ability to afford them.  Yes, we Canadians vary much from our friends south of the border who sometimes seem to boast without thinking of their  ability to have a new insulin pump (after they've decided the one they just received isn't their cup of tea after a few months) or CGM.  Here in Canada, we wonder if we can ever try these devices they post about, let alone find a private/work insurance provider and/or province that will help fund it.

Chicken !!! (I just about swerved the car off the road when my friend screamed this out when driving through Port Perry) !  Yes, a fairly almost 9 hour drive to get to Barrie from Cornwall (a few pit stops along the way).  It made for some interesting experiences along the way with a T1D  friend of mine that I picked up in Kingston.

What did I learn from this conference that I didn't already know about?   I did find out  about a study taking place  called Ease-2  for an oral medicine that will be used in combination with insulin to help regulate blood sugars better in T1D.  I may contact the two researchers, Nancy Cardinez and Bruce Perkins (if the hyperlink above does not work for you - click on the following link for more information - https://www.mountsinai.on.ca/care/lscd/research-studies) 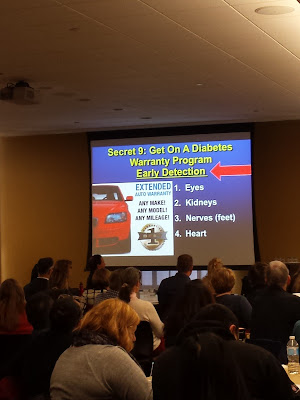 One of the speakers was Dr. Steve Edelman, who I've heard of through the grapevine.  He's had T1D since he was 15 - and along with his fellow co-worker who is also a T1D, Dr. Jeremy Pettus ... they created some great laughs along with getting to the more serious side of diabetes management.  Both work at TCOYD based in San Diego and put out some great videos (Steve Edelman went through the "warranty program" live at this conference - but you can get a jist of it at this link ).

What was interesting with the two speakers above?  No pushing of whether insulin pumping or injections was the way to control your diabetes, it is whatever works for you to keep you in control of your health.   American conferences I've attended in the past, seem to push pump technology, but that is probably much due again to the way American health system works hand in hand with the insurance/pharmaceutical/medical supplier companies. 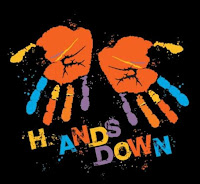 The emphasis though ?  Very strong on the use of the CGM, and both Americans did state that they understood that not many Canadians have insurance coverage for these devices.  Again, that south / north border thing with our two countries - we can only dream of using a CGM at times, unless you've lucked in on "donations".  Like myself, they stated that if they had a choice of either a pump or a CGM .... the CGM would win hands down.  I found that pretty amazing coming from them, and glad to see others thinking the same way (my next blog post will expand abit more on this MDI vs pump after a recent endo visit).

The one interesting thing, I spoke to a few diabetics who had been diagnosed 40+ years ago, much like myself, and when asking them about insulin pumping, I found it abit odd to hear that they were not interested at least in giving it a try.  To live in a province that funds pumping defies my sponge brain as to why not give it a go and the reason I moved here to Ontario!

Overall though for a first time attempt at encompassing a group of T1D's compared to the usual T2D crowd that many of us find CDA cater to ... it was a pretty amazing.  The only thing that many of us as T1D's found difficult though was the lack of carb counts on the foods we were eating, along with lack of low carb foods (which hopefully for future expos they're holding this year will be better organised).  Many of us were disappointed in that small aspect of the whole day, and paid dearly for it with blood sugars going abit whacky.

Also, I've heard through the grapevine, that CDA will hold it in a bigger venue for next year, due to the size of the crowd (the cut off was originally 500), which made it difficult to get into the exhibition area if you weren't into being squishy and friendly with everyone as you tried to get information.

Thank you CDA and their volunteers who without them events like this wouldn't go as smoothly.  For  those of you wondering if a #T1Dexpo will be coming to a town near you ... check out this link - it could be closer then you think !!!

Posted by FatCatAnna at 1:46 PM