Falling through the cracks of a small town hospital

Falling through the cracks of the Cornwall Community Hospital (CCH) system … that’s the only way I can come up with an explanation of what happened with my insulin coverage last week during a 4-5 hour period when I was asked to stop my insulin pump from delivery insulin during surgery.  I put Ziggy into 0% basal rate for 4 hours – but now think I should have lied and just left him on.
I think due to the diagnosis 2 weeks after my initial visit to ER for heavy bleeding and I was in menopause stage of life, along with the fast turnaround of 2 weeks after that for a spot on the slice and dice table this may have resulted in mistakes being made in what occurred that day with Pre-Op / miscommunication with the CDE’s / gas woman aka anesthesiologist, etc.

Was pre-op done to close to the surgery date?

In past surgeries (e.g. mastectomy done in 2007 for diabetic mastopathy ), the Pre-Op, meeting up with endo team, was all done within 2 or more weeks of the surgery date.  In my case at CCH, pre-op was done 2 days before the surgery day  ( DH came along ).  The RN didn’t say anything about whether pump would be allowed or not, but took down that I wore an insulin pump,along with my total basal rate, average basal rate (this same information was given to the Pharmacist from the CCH the next day who said it was unusual for them to be left out of the loop for pre-op).   The RN was fully aware that I was being seen by the Diabetic Clinic within CCH and I “assumed” they would be contacted for any help (they were already aware of my upcoming surgery by an email I’d sent to them).

Was any blood sugar testing taken during the surgery and didn’t
my CGMS alarms make them aware?

Sadly, I didn’t think of the CDE statement from an email earlier during the week when I’d asked her about wearing the insulin pump during the surgery …

“do you have a protocol for not wearing pump during surgery”

Her response to my query, with no suggestions,  made it obviously clear to me I was on my own with handling my diabetes control in the hospital (I have since learned she expected me to respond back with my answer). 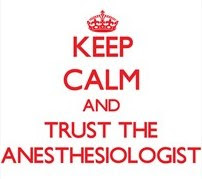 I assumed that when the anesthesiologist (gas woman) firmly told me that she would not continue if I kept the pump on, that insulin would be at least provided in the drip.  This was told to me as I was already being strapped down to go to la la land of no pain and she meant business (she wasn’t happy with where the RN had set up the drip, but my veins are sparse and RN didn’t go to my hand which has LOTS of plump veins and has been used in the past by the blood takers).  So, basically, I had no time to say, “ let me get my overnight bag and shoot up with Lantus “.   Yes, I was in a tough position at that point, trying not to panic.  I had come prepared, but not at the last minute when the surgeon’s clock is ticking for his other scheduled patients that were behind me!!  Gulp!!

Granted this was my first major operation using an insulin pump.  Previously, I was on MDI, and with pre-op it was always determined that I do my regular long acting insulin shot and that after surgery that I took over my diabetes control.  Did my being on an insulin pump throw off the pre-op and pharmacist?  This is where both my husband and I wonder …

was any insulin drip given during the 4-5 hours I was under their care?

My darling husband (DH) had been contacted at noon time as I was being wheeled into my room after being in recovery (surgery had started between 0730 – 0800 ) and he arrived about an hour later to hear my story about the blood sugar reading of 22 mmol/l (396 mg/dl) and how the staff had determined I should be given 10 units of rapid insulin.  I vaguely remember all this happening, and again, have no time reference.  I hope I didn’t yell, but I told them it was too much.  I remember being asked what they should give me and in my state of mind was calculating 1 unit of insulin would be lower me down 3.5 mmol/l (63 mg/dl) and told them to give me 3.5 units (if I’d been more with it I should have said 5 units).  I don’t even recall them giving me the injection.

My DH at that point looked at Bowie my CGMS and it was alarming like crazy (we are wondering now if the trainee RN who was holding him during surgery noticed this).    Bowie does not like being high, and was still registering at 22 mmol/l (395 mg/dl).  At this point, having my DH by my side, I was more with it and did my own finger stick test which showed I was around 14 mmol/l (252 mg/dl).  Obviously the insulin was working (maybe they did an intramuscular injection (IM) into my arm to make the insulin work faster … which is what I do when my BG is that high – but due to no time frame of injection I’m unable to figure it out).

With insulin coverage for a T1D it’s all about what TIME insulin is giving …
method of injection ... site it`s injected into …

This is where even more confusion starts is that the RN that was speaking with my husband didn’t realise that my pump was functioning.  Again, either I did not explain myself properly to the gas woman / RN when turning my basal rate off for the 4 hour surgery time.

So, even now as I compose this blog, trying to put together what occurred, it seems like a dream

So, DiabetesMine ( @samanthachan at Instagram)  … I told you the true story would come  with the picture that you asked permission to use at the Diabetes Innovations Summit at Stanford in November.  Even though the trainee RN who held Bowie during surgery had been warned about what would occur if my BG’s went up or down with him alarming.  I think he was ignored OR even worse case scenario when he was finally looked at, they assumed that that was the correct blood sugar number.  That is even after I  had told her and various staff earlier and during my 2 day stay that the CGMS reading HAS TO BE verified by a blood meter.  The fingertip NEVER LIES when it comes to real time blood sugar number.

It’ll always be a mystery to me … and personally I will not return to CCH for any surgical performance if I cannot go another route (see note below).  This is after speaking to other residents where I live, they avoid it at all costs.  Though if it’s a situation where I’m not able to drive to the next closest hospital ( Winchester District Memorial Hospital has been recommended to me by many people in Cornwall ), I just hope/pray that I have someone on my side (my DH or another T1D) able to ensure that my diabetes health care does not get lost in the cracks like it did with this hospital experience.

NOTE:  The one thing I have learned out of this experience is that hospitals in Ontario have different ratings (and probably in other provinces of Canada).  A few members from the CCH Diabetic Clinic came to speak to me due to what had occurred the day before with surgery.  They had stated that CCH is a #1 hospital (I have tried to find anything pertaining to what they had told me online but have come up empty handed so this is “my version” of the “rating system”).  If my surgery had been performed at either Kingston or Ottawa, which are larger populated areas, then  insulin pumps would be more accepted and understood by the medical staff members, and perhaps allowed to remain on in the OR.