Life as a Podder Chapter Deux 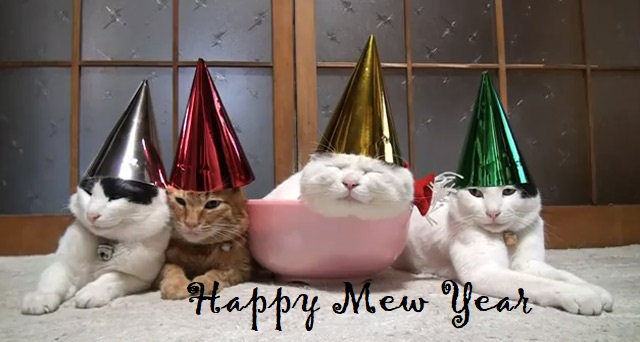 Well, with the approach of  the New Year I decided to go back to my Animas Vibe after having  issues with the Omnipod in my leg as well as dislike of the PDM (more on that at end).  My legs are an occasional place that I put my infusion sets in but I never had blood sugar results like I was having with the pod … high high high (my meaning of a “high” is anything above 12 mmol/l  or 324 mg/dl ).  Compared to where I had placed the Pod in other areas of my body over the month … it rarely went over except when I didn’t either bolus properly for food, etc.  So obviously, my legs with the plastic cannula … just do not work.  As you can see by the assorted pics below, with the 2nd pod placement … with what looks like watered down blood … maybe the infusion set wasn’t placed quite right, but the window that you can view the placement of the infusion set, is pretty well impossible to see if things are okay. 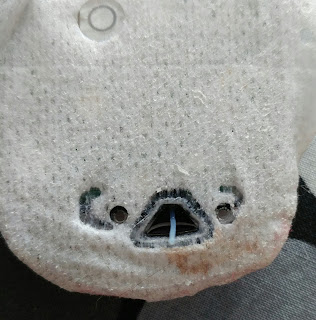 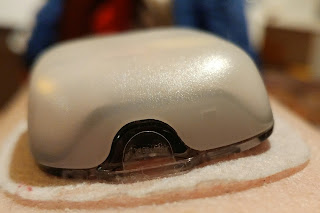 I guess my other thing with going back to the Vibe, is the simplicity of changing the suggested amount of insulin, either with using a different ISF or I:C ratio in the calculations that Animas programming allows you to do (see photos below when I'd decided enough is enough with the Omnipod).  The Omnipod PDM doesn't allow you to do this, along with extra steps to see what IOB you have onboard, tick tock tick tock ... my time is precious.  On the Animas below you can change the suggested amount to bolus based on the calculations of the “set” ISF and/or I:C ration.  To give Omnipod at least a run for it's money, I tried and tried with both user manual and forum groups to figure it this was possible … but nope – not doable.  I have a feeling the Omnipod PDM programming is abit on the “basic” side, and more for the person who perhaps doesn’t want to go outside of what the program in the PDM allows you to do.  Probably for the safety of the user, but not all of us follow the rules.  This has been my way of controlling my diabetes over the past 40+ years since leaving the next of home as a teenager. 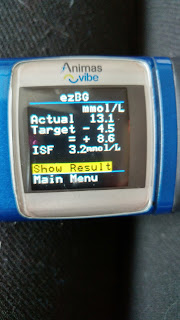 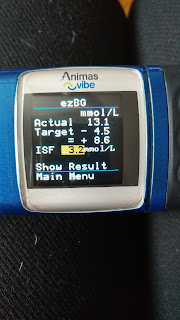 I was finding too that when I was really high with the Omnipod … like really high … DKA possibility … that correcting with an insulin injection, based on my calculations (this is what I do when I’m on MDI … using either my noggin’ and or calculator to determine amount of insulin to inject) … would bring me down much faster.  Otherwise, putting that large glob of insulin via the Pod was almost like putting water into me.  Even with doing a split shot of the amount over ½ hour … it just didn’t work well.

Plus, again, that friggin’ huge PDM (yes the clip pouch I was given, more bulkier than a tubed pump IMHO).  I found in the beginning of the months trial as a Podder, that when I was needing to bolus quickly, I often was going to my waistband, where I usually keep my Animas.

One thing that I did do by accident during the trial run, near the end ... due to how itchy the pod was on my skin, and that was only at the end of Day 1 (this was the only time I had irritation with the pod) . Because I didn't want to lose the insulin left in the pod (would Omnipod have replaced the pod because of that???) ... I stuck it out.  By the time came to remove it, by accident, when placing a new pod in place, without thinking ... I REMOVED A NEWLY INSTALLED SENSOR FOR MY DEXCOM!!!  I broke down at that point, and my hubby gently reminded me it was not the end of the world removing the CGM by accident.  Because I pay out of pocket for the Dexcom, it meant I went for 6 days without the CGMS.  And even now, as I write this, I'm taking a break from the Dexcom so I'm not out of pocket ... but I do miss the CGM the most for staying in the right range I like of blood sugars.

What has me abit miffed, and not just with Omnipod, but also Medtronic.  That the devices they are offering Animas users sort of like “old stock” to be able to make a profit I expect (in Medtronics case they are offering us the MiniMed 630g ( see this link  https://www.medtronicdiabetes.ca/minimed-630g ) .  I recently came across an article about the Omnipod Dash System (read more at these links https://diatribe.org/insulet-omnipod-dash-system-to-add-touchscreen-and-bluetooth and https://forum.fudiabetes.org/t/omnipod-q3-earnings-call-dash-pdm-update/2576 ).  The Dash was expected out in the 2017, but it’s set to launch sometime in 2018.  So, for any Animas users that are getting the “free” PDM offer (which is what I went for) … you’d probably want to upgrade to that, but at what COST is my big question.  I just know that my fingers got split with pushing those darn buttons on the PDM (doesn't help with the cold weather we've been experiencing that's not normal at this time of the year and lack of humidity).  I found it easier to use if I  kept some of my finger nails longer, in order to ease up on bloody thumbs/fingers.  It was abit annoying since I like to keep my claws clipped. 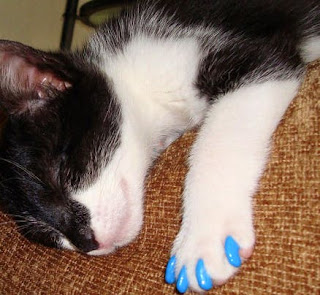 So, that’s it in a nutshell.  I’ll be heading out on holidays for almost 3 weeks, and bringing along both insulin pump systems (yes, have carry on – you can travel with all your medical crap <lol>).  I’ll also be bringing my pen needles, using Fiasp and Levemir as my insulins of choice for control.  Last time I went on a 3 week trip, all I used was MDI, sans CGM (I’m on fence post right now with bringing CGM for this holiday due to the space it takes up for souvenirs <lol>).

See you sometime in February and thanks Boss’s for letting me off the hook for abit of much needed down time from work!

NB:  Remember, my trial with the Omnipod may vary from yours.  So while I may not like it, doesn't necessarily mean you won't.  I've heard through the grapevine that Omnipod is offering the deal up to March now, rather than the end of December.  If you've ever wanted to know what it is like to pump insulin without any tubes, I'd say give it a try.  Perhaps your experience will be much better than mine has been.